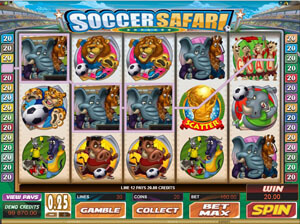 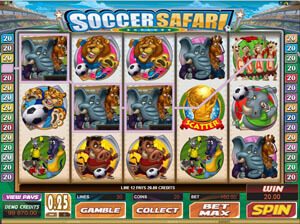 The sport? Soccer. The place? Gaming Club Casino. The event? An epic game from Microgaming where you get to back a winning team. Spin the reels of the Soccer Safari casino online slots and you’ll be doing just that. Plus, you could be sharing in the glory of trophy-sized payouts via the slot’s thrilling Free Spins, Multipliers, Wild wins and interactive Bonus rounds. For more casinos, you can find a list of online casinos on our site.

How do you bring an African safari theme together with the international sport of soccer? Easy – you let a whole herd of wild African animals team up and gear up for a big stadium soccer match, spread across the 5 reels and 30 paylines of this action-packed slot. It’s roaring good fun with Deer Cheerleaders, a Zebra Referee and zany Hyena Supporters cheering on the Wild Players on the virtual field. And if that’s not enough to get you into the spirit of the sport, a punchy soundtrack, complete with blowing whistles certainly will.

While a short intro movie sets the scene, the real fun and games unfolds the moment you start spinning. Simply make your coin size, payline and coin number selections and hit the spin button to get the reels rolling. Holding the key to power-packed payouts are a number of base game symbol combinations. Should three or more Elephant & Giraffe, Hyenas, Deer Cheerleaders, Buffalo & Ref, Jackal Players, Warthog, Rhino, Leopard and Lion symbols appear on the reels, you’re in for a win.

Symbols that really pack a punch though include the Soccer Safari logo which is Wild and can substitute for any other symbols, apart from the Scatter, to boost your winnings. The feisty Zebra symbol in turn acts as the slot’s Scatter and will reward players with 5 Wild Free Spins when it appears on the 1st and 5th reels. Those reels then become Wild while reels 2, 3 and 4 spin five times. Thereafter the centre reels are held in position while the 1st and 5th reels spins. If you think that’s fun, wait till you trigger the Go For Goal Bonus. You’ll need three or more Trophy Scatter symbols for that to happen, which will launch an interactive second screen Bonus round. First you have to select a team player to take a penalty kick, then you have to choose which one of the four corners of the goal he’s going to kick towards, with the Leopard taking the position of the Goalie. Score and you’ll win a generous Multiplier, applied to your total bet. If it’s saved, you’ll still receive a consolation Multiplier. Why is this considered such a hot slot feature? Aside from the fun interaction, you could win up to 60 000 coins. And don’t forget about the slot’s Gamble Feature via which your wins could be doubled or even quadrupled.

Ready to cash in on wild winnings on the reels of Soccer Safari? Sign up to play at Gaming Club Casino today. To kick off your play, you’ll get two welcome bonuses valued up to 350 bonus credits in your currency. Score!