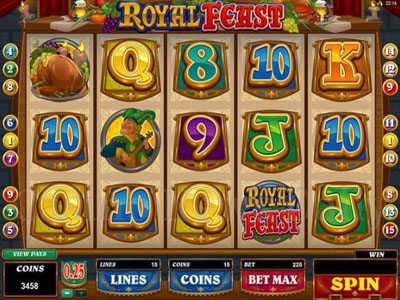 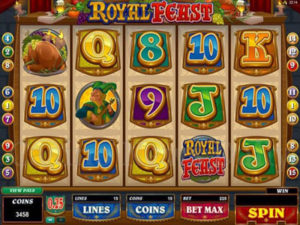 Oh, to live the royal life. While most of us can only dream of being a king, queen, prince or princess, the colourful characters in Microgaming’s Royal Feast Video Slot, get to experience it for real on the reels of this fun-filled game. But be warned, the slot might have you work up quite an appetite.

The Royal Feast Online Slot was released at the end of 2010, and while it might not have taken the gaming world by storm, it has all the elements to make it a thoroughly enjoyable game. The theme in itself is lip-lickingly good, with scrumptious dishes fit for a king, taking centre stage. And what would a royal feast be without wine, beer and music? You’ll find all these elements and more on the slot’s 5 reels, set against a candle-lit backdrop of an ancient castle interior.

But it’s not just the royals that get to indulge in a food feast, players can also share in a banquet of winnings and a splendour of regal riches. Here’s how to make the most of the slot’s 15 paylines. The lowest value payouts are made possible when three or more 7, 8, 9, 10, Jack, Queen, King and Ace card symbols appear on a winning line. Worth even more are icons of a roasted Chicken, a proud Chef, a musical Jester, the wine-drinking Queen and the merry King. But even wilder is the Royal Feast icon which is as you might’ve guessed, the slot’s Wild symbol. This means it’s empowered to substitute across the reels, making many more festive symbol combinations possible – but note, it won’t substitute for the Scatter.

This brings us to the Crown symbol, which of course acts as the Scatter. You only need two or more Scatters to appear from left to right on the reels to trigger the slot’s round of 5 Free Spins. Should another Scatter appear during this round, that reel will get held and the round will restart, resulting in more winning opportunities. And don’t forget that Royal Feast also boasts a Gamble Feature, giving you the chance to double your win – simply pick between red and black. With a little luck, this feature could boost your winnings considerably.

If you’re ready for a royally good time gaming, then you’d want to spin and win on the reels of the Royal Feast Online Slot. Not sure where to play? We suggest you pay a visit to Lucky Nugget Casino. Royal Feast is just one of many royalty-themed slots available at this richly rewarding online gaming destination – others you might enjoy too include the likes of Kings and Queens, Kings of Cash and Sir Winsalot. In total, there are over 500 online casino game titles to choose from, with table games, scratch cards and video pokers thrown into the mix. Another great reason to join Lucky Nugget online casino is its choice of two welcome offers – a 100% match up to 1000 bonus credits or a 150% up to 200 bonus credits. Either way, you’ll feel like royalty.