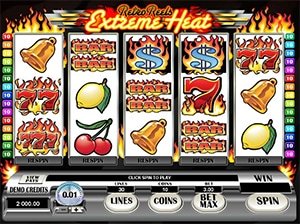 Ready to rock the reels at any of your favorite Microgaming online casinos? You’ll want to do just that from the moment you launch the electrifying Retro Reels – Extreme Heat Online Slot. This slots hit from Microgaming, revives recognizable classic slots symbols in video slot format that’s packed to the brim with winning opportunities and smashing new features.

Retro Reels – Extreme Heat is the third installment of Microgaming’s trilogy of Retro Reels Video Slots. First to be released was the original Retro Reels in 2010, followed by Retro Reels – Diamond Glitz only a year later and after that Retro Reels Extreme Heat, in that very same year. What sets this series of games apart from other slots is their unique Respin Feature, which we’ll get to later.

Let’s first take a look at the Retro Reels – Extreme Heat Video Slot’s visual and audio effects. The graphics in this slot include some classic slots icons including Fruit, Bars, and Sevens while the reels appear to be hosted in a jukebox-like frame. The game’s old-school appeal is further amplified by a dynamic soundtrack featuring an electric guitar soundtrack and burst of sounds when its retro-shaped buttons are clicked.

The 5-reel, 30-payline video slots winning ways, in turn, will propel you into the present. Let’s start right at the bottom with the lowest value icons. Find three or more of the following symbols on an activated payline in the base game and you’ll score for sure: Cherries, Lemon, Bell, Single Bar, Double Bar, Triple Bar, Single Seven, Double Sevens and Triple Sevens. A mix of Sevens or mix of Bars will also help you pocket a win. This brings us to the slot’s Wild, the Flaming Dollar symbol. This icon can help you pocket wins as it substitutes for other symbols – all except for the Scatter of course.

The Free Spin Bonus Scatter, in turn, will trigger exactly what it says when 3 or more symbols appear on the reels. When 3 Scatters appear, it will trigger 10 Free Spins, 4 Scatters in turn will trigger 15 Free Spins and 5 Scatters will trigger 20 Free Spins. During Free Spins, all wins get doubled, plus the feature can get re-triggered, and you could stand the chance of pocketing a jackpot payout of 440 000 coins.

The most iconic feature found when playing the Retro Reels – Extreme Heat Video Slot, is its aforementioned Respin Feature. How does it work? Once you’ve spun the reels and they come to a standstill, this feature gives you the chance to independently spin any reel of your choice by clicking on the ‘RESPIN’ button beneath each reel. Why would you want to do this? To increase your chances of achieving a winning combination. Will it cost anything? Yes, the cost of the respin is indicated beneath the ‘RESPIN’ button and varies throughout. Is it worth respinning a reel? You bet.

The Retro Reels – Extreme Heat Online Slot can be enjoyed at Gaming Club Casino where you’ll also have access to the rest of the Retro Reels series and hundreds of other thrilling online casino games. Best of all, you’ll get two deposit bonuses worth a total of up to 350 credits to get you started. Are you game?