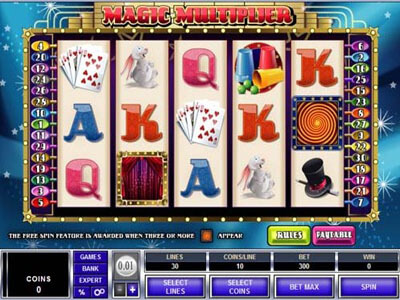 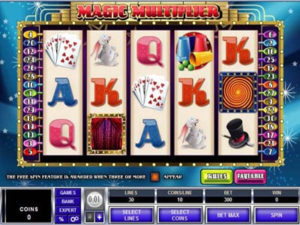 Magic Multiplier is a wonderful video slots game from Microgaming that comes with 30 paylines, Free Spins, bonus features, and a highest fixed jackpot of 10 000 coins. Its theme is magic, but not the fantasy kind, rather the sleight of hand kind used by magicians. Let’s take a closer look.

Powered by the world’s number one casino software provider, Magic Multiplier is a gem of a game with great graphics, pitch-perfect sound, rewarding bonus features, and seamlessly smooth gameplay and navigation. The Magician symbol acts as the Wild, and it can take the place of any other symbol, with the exception of the Scatter symbols, which include the Cups, Curtain, and Wheel symbols. The Wild substitutes in order to create winning combos, plus the wins get doubled. The other symbols in the game include the Gloved Hands; Cards; Magician’s Hat plus Wand & Rabbit; and top-value card symbols like Nine, Ten, Jack, Queen, King, and Ace.

The Free Spins round is activated when three or more of the Scattered Wheel symbols make their appearance on the reels. This will award a random number of Free Spins, along with a Multiplier of up to 5x. Take note that the Free Spins can be reactivated. Then there are the two bonus features – the Curtain bonus and the Wheel bonus.

The Curtain feature is awarded when the Scattered Curtain symbols make their simultaneous appearance on the 2nd, 3rd, and 4threels. All you have to do is select one of these symbols – the curtain will then open to reveal the prize behind it. Take note that on top of this prize, you can also get the chance to make an additional selection.

Then there is the Cups bonus feature, which gets given when Scattered Cup symbols make their appearance on the 3rd, 4th and 5th reels simultaneously. Here you will be granted three rounds – during the rounds, a ball is hidden beneath one of the Cups: The Cups are then moved around randomly. Once the Cups are done moving, you must pick one. If the selected Cup reveals the ball, then you will receive a prize. If you’re unsuccessful in retrieving the ball, you will receive a consolation prize.

Magic Multiplier is available to play at most leading online casinos, including the original, Gaming Club. Launched in 1994, Gaming Club offers excellent bonuses and promos, safe and secure payment options, around-the-clock customer service in multiple languages, and more than 500 games for you to choose from. The moment that you sign up to play, you will be awarded an awesome welcome bonus that’s worth up to 350, credited over your first two deposits. Plus, Gaming Club is licensed by the Maltese Gaming Authority and is renowned the world over for its adherence to timeous payouts, accountable conduct, and fair gameplay. Register now and put it to the test!