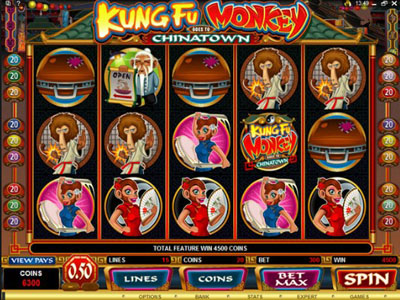 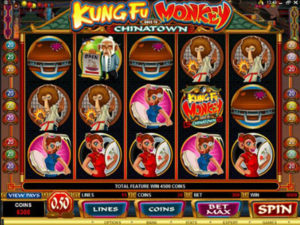 Brush up on your Martial Arts skills, because you are going to Chinatown with Kung Fu Monkey. Why? There are loads of winnings up for grabs on this video slot, including two Scatter symbols.

Kung Fu Monkey is a 5-reel, 15-payline video slot from Microgaming, the creators of epic online slots like Avalon II, Immortal Romance and Ariana. The coin sizes range from 0.01 to 1 and the maximum bet you can place is 300 coins, with possible winnings of up to 25 000 coins during regular play and up to 50 000 coins during the Free Spins feature. There’s also a great Bonus game where you can win up to 8 250 coins if you make it through all 3 rounds and rescue Baby Monkey.

The game symbol is Wild, so it will take the place of the main character symbols and form winning combinations. As previously mentioned, there are two Scatter symbols: the Gong Scatter and the Chinatown Scatter. While the Wild symbol does not substitute for these two symbols, the Scatters will trigger a Free Spins and Bonus round. Should the Gong Scatter appear on reels 1 and 5 during a single spin, you will not only receive 1x your total bet, but you will also win 10 Free Spins, with all wins being doubled during this feature. Then there’s the Chinatown Scatter which will unlock the Kung Fu Bonus, should 3 of these symbols appear on reels 2, 3 and 4 during a single spin – it will also pay out 1x your total bet.

There are 3 levels during the Kung Fu Bonus. In the first 2 levels there are 6 opponents to fight: 5 can be defeated for bonus awards, while 1 is undefeatable and will stop the bonus round, but will award you with Free Spins. If you successfully defeat 3 opponents on both Levels 1 and 2, you will advance to Level 3 to face the Big Bad Boss and rescue Baby Monkey. In Level 1 Kung Fu Monkey is faced with 6 baboons, while Level 2 there are 6 Ninjas to pick from. Should you make it to Level 3, you have to pick a successful fight combo to fight and beat the Big Boss.

Kung Fu Monkey can be played at Gaming Club Casino, which is one of the best online casino sites and similar games that you can enjoy include Karate Pig, Fighting Fish and Path of the Penguin. In fact, there are loads of themes to choose from with over 350 video slots to play and a total of more than 500 games in total. These include video poker, table games and even scratch cards.

Get ready and kick your way to winnings with Kung Fu Monkey, only at Gaming Club Casino.