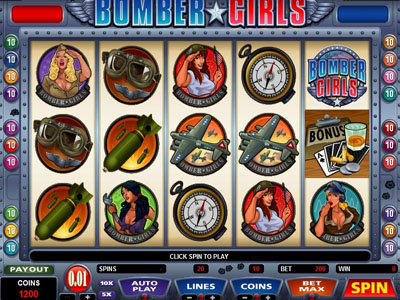 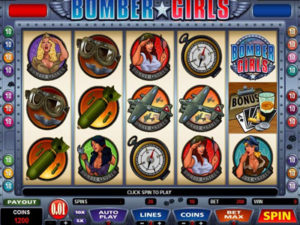 The sky’s the limit as far as winnings are concerned when you spin the reels of Microgaming’s explosive Bomber Girls Online Slot. Brace yourself for all-out action with Scatters, Wilds, Free Spins, Multipliers and Bonus rounds that can blast onto the screen at any given time.

But there’s more to this 5-reel, 20-payline video slot than fighter planes, pilots and bombs – the Bomber Girls slot celebrates what its name says, a bevy of brave beauties who are the real force behind each flight mission. With a host of gorgeous blondes and brunettes in the roles of mechanics, nurses, soldiers and supporters, nothing can go wrong. And for you as the player, the object of winning is always within reach.

While the video slot doesn’t boast an intro movie, the colourful graphics and vivid animation more than make up for it. Symbols depicting Aviator Gear, War Planes, Bombs and a Compass set the scene for an air attack of note. In turn, the symbols of the Six Individual Ladies paint a picture of what goes on behind the scenes. Adding a little pizazz, is a big band inspired soundtrack that will have you tapping your feet while spinning to win.

And win, you certainly can. Bomber Girls is packed with payout potential. Aside from winning symbol combinations of three or more symbols on an activated payline, the online slot also offers Wilds and Scatters. The Bomber Girls logo acts as the Wild symbol and can substitute for any of the six Lady symbols. Plus, it will double your win during substitution. The slot’s 1stScatter in turn is symbolised by a Compass icon. When 3 Compass symbols appear on the 2nd, 3rd and 4th reel, it will trigger the slot’s Free Spins Bonus round. The number of spins is calculated by the sum of the numbers displayed on the first two Scatters, while the third symbol displays the Multiplier. You can trigger up to 14 Free Spins and an up to 3x Multiplier during this feature and cash in on winnings of up to 150 000 coins. The slot’s 2nd Scatter is the Bonus logo which will trigger a High-Low Bonus round when you’re shown one face-up and four face-down cards. You then need to predict whether the next card is higher or lower than the one before. If you guess correctly you’ll score Multiplier winnings, while a wrong guess will end the round. You can also gamble your winnings with a Double Up Bonus Feature within this round – or choose collect, if you don’t want to risk it.

If you think Bomber Girls is the bomb, then head over to Lucky Nugget Casino where you’ll get to enjoy this feature-packed online slot and hundreds more just like it. As a new player, you’ll qualify for a choice of two online casino bonuses – a 100% match up to a 1000 credits free if you’re a big spender or a 150% match up to 200 bonus credits if you’re just looking for fun. Both will boost your bankroll, so you’ve got nothing to lose.