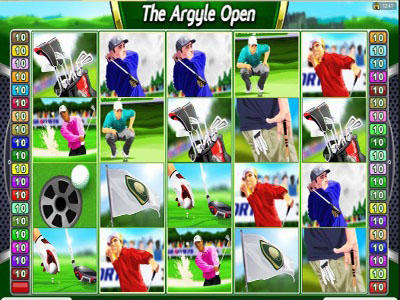 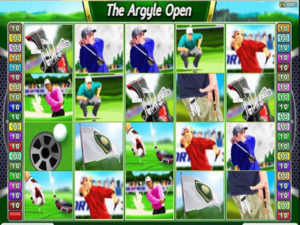 It’s known as the sport of kings, a leisure activity around which many a business deal has been closed, and played on the most beautiful landscapes around the globe – it’s golf, and it’s the theme around which Microgaming’s sporty release, The Argyle Open Online Slot, is centered.

The 5-reel, 40-payline online slot kicks off with a short intro movie, setting the scene for the golfing event of the year. Once in the game itself, the soothing soundtrack complete with chirping birds along with bright sporting imagery, echo the prestigious golfing theme. The name ‘Argyle’ has many connotations – one being the descriptive name of the tartan pattern often worn by golfers, another is that of a country club in the U.S. while ‘Argyll’ is a region in Western Scotland, which is considered golf country. It’s likely that all of the above was the inspiration for this fictional sporting event which is themed around everything golf-related – from the course and its greens to the professional players and their state-of-the-art equipment.

But it’s not just the golfers that stand to score on the reels of this riveting slot, players are given endless ways to pocket payouts too. With 40 paylines, there are ample opportunities for winning symbol combinations of three or more icons to appear on the reels. Keep your eyes open for The Argyle Open logo to show up as it’s the slot’s Wild and will substitute to create extra chances for you to coin it. Plus, find five Wilds and you’ll pocket 1000 coins. The Scatter, in turn, is the Golf Ball symbol and has the power to trigger the sought-after Tournament Bonus when three or more symbols appear on the reels.

The Tournament Bonus is exciting enough to make you want to keep on spinning. Once it’s triggered, you’ll get to choose one of five pro golfers who will play on your behalf. In total, there are three competitive stages to compete: stage one lets you tee off for a coin reward, while stage two takes you down the fairway for an additional coin reward and stage 3 will bring you to the hole to win Free Spins. In total, you can score either 10, 15 or 20 Free Spins along with a 2x, 3x or 4x Multiplier. Sink the putt in one shot and you’ll score the top reward – 20 Free Spins with a 5x Multiplier. The casino also has an online mobile casino offering.

Looking for an online casino where you can tee off on The Argyle Open Video Slot? Why not hit the green at Lucky Nugget Casino. Here you’ll get first-class treatment and rewards from the get-go, with a choice of two generous welcome bonuses: a 100% match up to 1000 bonus credits or a 150% match up to 200 bonus credits in your currency of choice. Plus, you’ll receive daily deposit bonuses and have over 500 other top notch online casino games to choose from including more sports-themed options. Now that’s a whole lot of hole-in-one offers you don’t want to miss out on. It also